Sometimes bad luck turns out to be great. I got run over by a car, which lead to a lawsuit and some money coming my way. So I could pay a visit to the great mr. Blitz, and make a dream come true. Which was buying a piece from the legendary Ding Kilns, from Hebei province.

This bowl is 22 cm in diameter, and stands 5 cm high on a straight footrim. The bowl is made from a white porcelain, covered with the off-white Ding-yao glaze. The dating is Song to Jin dynasty, 11 or 12th century.

The footrim is glazed, because these bowls were fired upside-down(fushao). In this way they could make the body thin, and it still wouldn’t warp in the kiln. Also it made it possible to stack these bowls in saggers, and make a higher production. 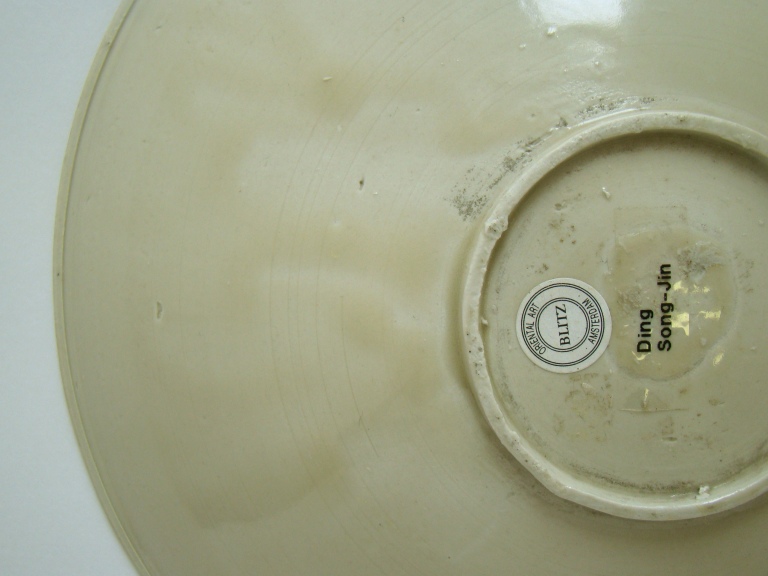 The glaze shows the typical ‘teardrop’ effect on the outside, where the glaze runs, and gets a bit thicker, and of a straw white color.

Ding ware was produced in Ding Xian (modern Chu-yang), Hebei Province, slightly south-west of Beijing. There was white porcelain being made here as early as the Tang Dynasty,Ding ware was the finest porcelain produced in northern China at the time of the Song dynasty, and was the first to enter the palace for official imperial use. Among the five great kilns of the Song Dynasty, only the Ding kilns produced white porcelain, and it was quite famous during its time. It was for a time offered as tribute to the imperial families but was then discontinued for an unclear cause. The official given reason was that Ding porcelain had unglazed rims.